Genealogist, Author, Producer and Speaker Megan Smolenyak Smolenyak (yes, that's her real name) wears many hats and has appeared on so many TV shows including Good Morning America, the Today Show, the Early Show, CNN, NPR and BBC. She has also written numerous books. So it was a real challenge for me to craft questions she may never have heard before.  My solution was to cover a few of her famous and not so famous genealogy branches, many of which were created out of her passion alone and a desire to share her expertise.


To say that I admire her is an understatement. Megan awarded me a grant (something she did for so many genealogists out of her own pocket) when I took on the very daunting task of producing, shooting, editing and financing my genealogy series By Her Roots on my Irish Ancestors for her very popular RootsTelevision.com genealogy channel. Just to keep things interesting Megan's genealogy career has branched out to include her being a Cold Case Researcher for the Army, the Naval Criminal Investigative Service (NCIS) and the FBI.

As former Chief Family Historian and spokesperson for Ancestry.com, Megan has a bottomless bag of wisdom on how to move through the minefields of genealogical and historical research. Her expertise has put her into the world of Celebrity as a consultant on 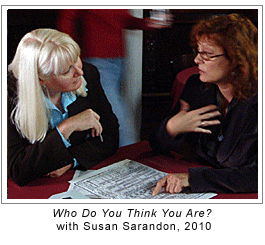 "Who Do You Think You Are", "Faces of America", "African American Lives", The PBS series "Ancestors", "Timewatch" and "They Came To America".  We have all now read how she traced Obama's Irish Roots and found Michelle's Slave Ancestors!

I began this interview, with a question stemming from my own goose bumping late nights and attempts to solve the mystery of how I ended up experiencing life with this particular strand of DNA. DNA, I believe holds all the experiences of those who came before us.
Alannah Ryane, Family History Producer

ALANNAH: You and Dr. Ann Turner wrote the best selling book TraceYour Roots With DNA about genetic genealogy. You also helped Alex Haley's nephew discover their Scottish roots through DNA testing. Now The Genealogical Society of Ireland and Ireland 's Royal College of Surgeons have launched a new project to explore human genetic variation in the Irish population. What are your thoughts on this project and the path genetic genealogy has taken today?

MEGAN: I first got into DNA back around 1999 as a result of my work with the U.S. Army’s efforts to identify soldiers from past conflicts such as WWI, WWII, Korea and Vietnam .  Because of that, I was one of the first in line when DNA testing became available commercially, and as an early adapter, I launched one of the first ever geographic projects way back in 2001. At the time, folks wondered what the heck I was doing, and it was hard to defend back before many “got it.” So I’m delighted now to see projects such as the Irish DNA Atlas project. I’m bummed that I can’t participate since I’m only half Irish heritage-wise, but I expect to be one of the many around the globe who will ultimately benefit.  In terms of genetic genealogy in general, I continue to be greedy. Would just like more, more, more! More tests, more tools, more studies, more data, etc. Let’s hope more countries follow this Irish model.

ALANNAH: One of your longest and more famous investigations uncovered the true story of Annie Moore the teenager and first immigrant to pass through Ellis Island . Something about Annie's family tree didn't sit right with you and after a number of years the difference between the two identified Annies was revealed. What was it that made you suspicious and what can you tell the rest of us that have often fallen into the trap of accepting truths that steer us in the wrong direction?
MEGAN: I actually only learned about the wrong Annie by accident. I was working on a PBS documentary on immigration to America . Being an Irish American, I knew of Annie and “pitched” her as a story, telling the producers I would track down her descendants for an interview. They agreed, so I set about finding them. It was easy to do because of all the articles about them. But one of the challenges with historical documentaries is finding appropriate visuals – not nearly as much as we have these days – so I told the producers I would snag Annie’s paper trail to use as illustrations. The first one I found said she was born in Illinois , but that didn’t worry me since such errors are common in old documents. But then I found another that said Illinois – and another. And that’s how it dawned on me that the wrong Annie had been permitted to slip into the cracks of history. Finding the real Annie was a needle in a haystack situation, so took about 4 years. What blew my mind is how many people had simply accepted the tale of the other Annie without so much as checking a census record. When it comes to family lore, there’s almost always a seed of truth, so those tales are always worth pursuing, but you have to be open enough to recognize other realities when they smack you upside the head! BTW, the Annie saga continues. I’ve been involved with excavating her story for 9 years now.


Here is a video we featured this week on our Family History Channel on YouTube because it was created by a teacher to instruct students on Ellis Island. The soundtrack by The Irish Tenors is the song "Isle Of Hope, Isle Of Tears" the story of Annie Moore's entrance to America.

In Part 2 of this Interview Megan answers my questions on working with coroners and medical examiners to locate the next of kin for unclaimed persons, as well as the kin of a WWI Irish Immigrant from 1892 Co. Galway.


ALANNAH RYANE  is TheWildGeese.com's Media Manager and Family History Producer.  A native of Ontario, Canada, she has an extensive media background, including CBC TV News Production, TV, radio and print interviews and conducted promotion for independent and foreign-film distributors in Toronto.  WG

Click Here To Sign Up For Our Free Newsletter and read our EXCLUSIVE interviews! Try our IRISH HISTORY PUZZLER for a chance to win. A $10 gift card towards merchandise from our shops goes to the first who answers the puzzler correctly - A New Winner Each Week!

From Disaster to Irish Refuge. Was he ordered into a lifeboat to be the fallguy?
Manhattan's famous watering hole PJ CLARKE'S was home to generations of Clarkes from Co. Leitrim Ireland.
Our Canadian videographer Interviewed the Irish filmmakers of 'Diaspora' and 'Alive From the Divas Flats' at the 2012 TORONTO IRISH FILM FESTIVAL.
SAN ANTONIO, Texas – Honoring the 41 Irish Heroes of The Alamo ... Presented by 'THE WILD GEESE IRISH SOLDIERS AND HEROES' Irish Whiskey Collection
KNOW THY PLACE from Cork, Ireland "THE ARCHAEOLOGY OF GENEALOGY" uncovers your ancestral home's family history.
The play 'Kid Shamrock' about an Irish fighter who lost the title because of the drink then won his battle with alcohol opens in Manhattan.